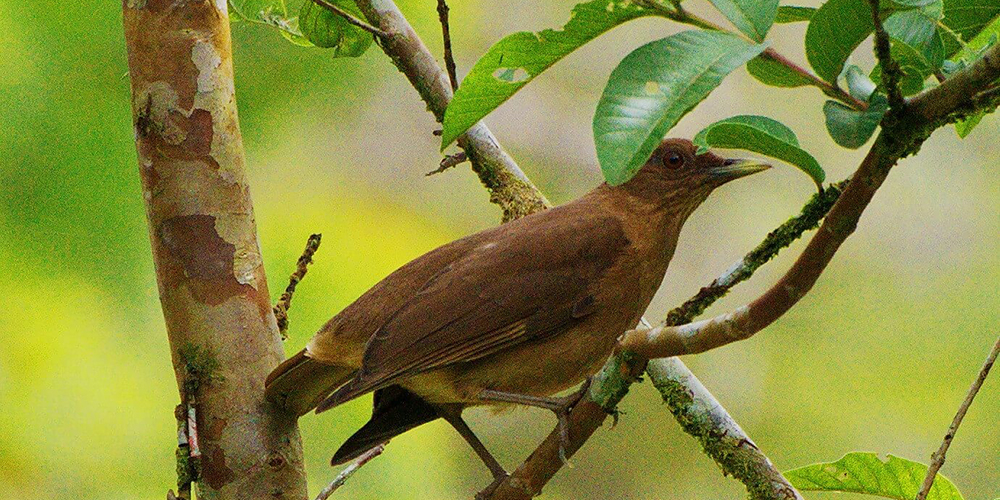 El Yigüirro, also known as the clay-colored thrush, was declared the national bird of Costa Rica on January 3rd, 1977 and has become an emblem for Costa Rica’s nation. It has also been known to play a significant role in Costa Rican literature and traditional music, celebrating the importance of this bird with The National Day of El Yigüirro taking place on December 16th.

Admittedly, this bird might not be the most beautiful or colorful, but its constant and melodious singing is what sets it apart from the other birds. This bird may go unnoticed due to its small size and plain brown color, however, if you were to closely pay attention, you would be hearing the bird’s friendly singing. El Yigüirro’s song consists of low-pitch cries in a steady tempo and slurred manner. Interestingly enough, this song is composed of different tonalities due to the fact that El Yigüirro uses sounds it has previously heard.

The reason this bird has been appreciated and praised so highly by Ticos is due to its tradition to indicate the rainy season, or planting season for many of Costa Rica’s laborers. According to popular tradition, one of the reasons why this bird is considered to be special is because it’s presumed that it’s the bird’s singing itself which attracts water and thus joy for the agricultural laborers. Another reason why this bird is considered to be noteworthy is because of the fact that the bird doesn’t reject any form of contact with humans; although discreet sometimes, it is always present and nearby.

El Yigüirro’s mating season usually lasts from April through June, which is why as we come into the end of this season, I invite you to go to your backyard in the morning and see if you can identify this iconic bird.