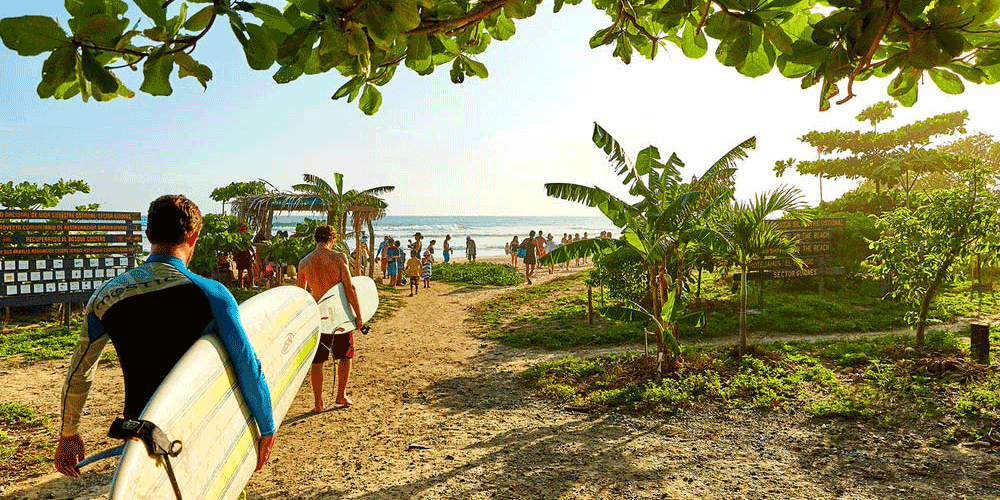 Tamarindo Bay is formed by the conversion of Playa Grande and Playa Ventanas. It is an area known for its beautiful beaches, which attracts millions of visitors each year. You have a variety of places you can stay; hotels, condos, privates homes all great options, for all types of budgets. Within the tourist area, you will find many restaurants with a wide range of international cuisine and a very active nightlife. Here you can also go surfing, as it is famous for having awesome waves. Tamarindo Beach has been awarded the Blue Flag Award on a consistent basis, this award recognizes the commitment to the environment by providing a clean and safe place for visitors.

The National Park Marino Baulas is located on the Nicoya Peninsula and includes several attractions that will catch your eye as Carbon Beach, Ventanas and Langosta, the Morro and Hermoso hills and mangroves San Francisco and Ventanas. It is a place of special importance because in this sector spawns the leatherback turtle, hence the name of the national park which translates to ‘The Leatherback Marine National Park.’ The leatherback is the world’s largest sea turtle and is in danger of extinction. Costa Rica protects these turtles to keep their populations the healthy and growing number of individuals.

Samara Beach is a bay about 4 kilometers long, with clear sand, gentle waves and an area of mangroves. It is recognized as one of the safest and most beautiful beaches in Costa Rica. On the horizon is Chora Island, right in front of the Punta Indio, where one can spot an area of coral reefs. The vegetation of the area is landlocked, so you can appreciate trees like the manzanillo, coconut palms, and creepers such as beach bean plants, among others. This beach, like Tamarindo, has received the Blue Flag Award for its commitment to the environment. In addition to its beautiful beach, the town of Samara offers many attractions and water activities such as surfing, fishing, snorkeling, diving, etc.

These beautiful beaches are characterized by their size and clear sand, in addition to its strong waves. Nosara Beach has a length of 3 kilometers and forms a beautiful mangrove in the Nosara River. One of the most outstanding tourist attractions in the area is Nosara Point, formed by a set of rocks where the waves break. Both Guiones and Nosara beaches have a good tourist offer that will allow you to enjoy horseback riding and boat trips through the estuary. Their strong waves make these beaches an ideal place for surfing, thanks to their beautiful landscape they have become a home for yoga and spiritual tourism.

Miravalles Volcano is located in the Guanacaste Volcanic Mountain Range, at an altitude of 2028 m.s.n.m. It is protected within the Protected Area. Near the town of Guayabo, several places offer hot springs of a yellowish color, laden with volcanic minerals to help you relax. In addition to its natural attractions, the Miravalles volcano is also used for geothermal energy, because it is one of the 7 active volcanoes of the country. In the Hornillas sector, you can walk by a volcanic crater where you can see hot mud, fumaroles, and Sulfur Rivers while enjoying the healing benefits of these minerals.

Costa Rica is a country rich in natural beauty and because of its many rivers, you can find beautiful waterfalls. One of the most beautiful in the country is the series of waterfalls, Llanos del Cortez. They are located near the town of Bagaces on the way to Liberia. To enter the place, one must detour on a dirt road for a few kilometers, and walk through a transitional forest. Among the peculiarities of this waterfall is the white sand beach that is formed by the sedimentation of the river and the pool of clear water to enjoy the sun and nature.

The Barra Honda National Park, in addition to offering several trails within the dry forest, also features one of the most beautiful caves in the country. It is a cave located a few kilometers from Nicoya and 450 meters high; therefore, in order to visit, one must descend several meters on a vertical ladder. The cave system of Barra Honda combines ancient coral reefs that emerged from the normal lifting of the tectonic plates and the stalactite and stalagmite formations. Although the cave system has not yet been fully explored, one of which is open to the public (Velvet sector).

Located in the northern part of Guanacaste, Santa Rosa National Park protects a very important area of dry forest, characterized by being unique in Central America. It also has two sectors: Murciélago and Santa Rosa, each has beautiful beaches rarely visited, among which are: the Hachal, Danta, Coquito, Santa Elena, Blanca Naranjo and Nancite. The park is recognized for its wildlife; thus, in the vicinity, there is a biological station that monitors animals such as white-tailed deer, howler and white-faced monkeys, sea turtles, reptiles and amphibians, among others. On the other hand, the park has great historical importance for the country, because here is where we find Casona de Santa Rosa, where the Battle of Santa Rosa occurred, and the Monument to the Heroes of 1856 and 1955.

The Reeds sector and its surroundings are rarely visited by foreign tourists but it is an area rich in tourist attractions. The city of Reeds is located in the plains of Guanacaste, on the road to Liberia. Some of the activities available in the area are: rafting on the Corobici River, hikes in the Pelado Volcano, and visit the archaeological site El Farallon which has great historical importance for the petroglyphs located on the stone wall near a river. It is a place that surely allows you to connect with the history of our people.